Bananas are best when paired with peanut butter or chocolate spreads. Unfortunately, it’s difficult to apply spreads to a banana. Entrepreneurs Renee Heath and Bechara Jaouden have come up with the solution, a device they call Banana Loca, which they pitched on Shark Tank Season 13. After securing a deal with Mark Cuban and Kevin O’Leary, it’s only right to have a Banana Loca update.

Banana Loca is a simple kitchen tool that ‘cores’ and fills bananas, cucumbers, zucchinis, and even donuts. After the banana is cored, you can use the spread pump to get your favorite filling into the center of the banana. It’s mess-free and delicious.

The sharks were impressed with the product right off the bat. Renee and Bechara revealed that they hadn’t done much marketing, but their sales over the last five months were about $134,000. Each Banana Loca cost $6 to make and retailed for $26.99. 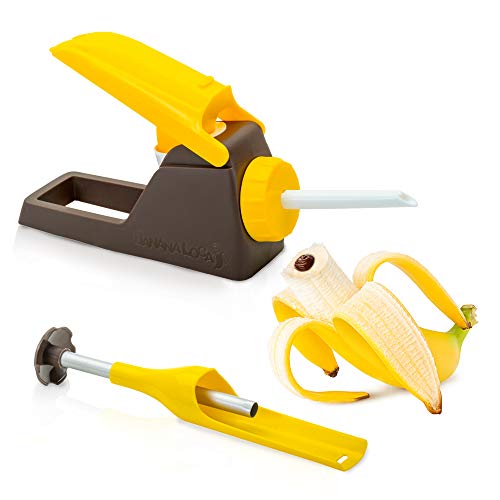 The sharks were surprised by the high retail price, especially for a relatively simple device, but were impressed with the overall sales. Meanwhile, Renee and Bechara assured them that the investment would go into inventory and marketing.

Mr. Wonderful (Kevin O’Leary) was the first to make an offer. He offered them $250,000 for a $3 royalty per Banana Loca sold in perpetuity. He didn’t want any equity.

Before Renee and Bechara could react, Mark Cuban had an idea. He wanted to work with Kevin, so he offered a deal that benefitted them both. Together, Mark and Kevin offered $250,000 for 25% equity, plus a $3 per unit royalty until the initial investment was paid back. The entrepreneurs tried to lower the royalty, but Mark and Kevin were sticking to their guns. In the end, Renee and Bechara accepted the deal.

So, where are they now? Here’s a quick Banana Loca update.

Due to the recent airing of Shark Tank Season 13 Episode 9, we don’t have any new sales data for a detailed Banana Loca update. However, with the popularity of the show and a simple-to-use product, there’s no doubt that Renee and Bechara are seeing an influx of orders. And with the extra capital from Mark and Kevin, the company will only continue to grow.

When we get more news on a Banana Loca update, we will be sure to let you know.

Before you go, check out more company updates from Shark Tank Season 13 on our Season 13 products page.