Comics, animations, and other media rarely feature the history of black culture before slavery. Geiszel Godoy, Manual Godoy, and Teunis De Raat are seeking to change that and have already come a long way with their popular comic series. After sharing their entertainment brand with the sharks on Shark Tank Season 13, what happened to the company? Find out in our Black Sands Entertainment update.

Black Sands Entertainment is a company based on uplifting black creators and exploring their rich history. Right now, they mostly focus on comic books, with an animated feature for their flagship IP in the works. Geiszel Godoy, Manual Godoy, and Teunis De Raat are committed to creating an inclusive space — and they are well on their way. 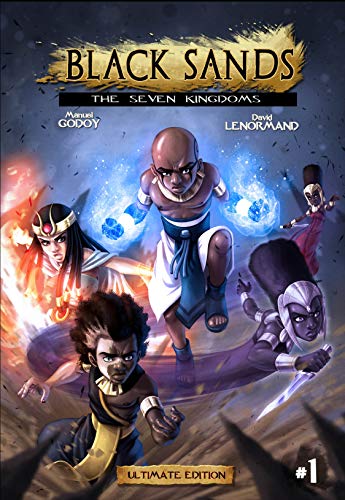 The sharks viewed a short clip from their animated feature. Manual revealed that their year-to-date sales were $800,000 and that their IP was the main source of revenue for the company. They had 12 different titles signed on and made most of their money from physical comic book sales.

Before the other sharks could make offers or voice their opinions, guest shark Kevin Hart jumped in with an offer. He had the writers, illustrators, and distribution that the entrepreneurs needed. His production company would be able to take this IP to the next level, especially considering the success it already had.

Mark Cuban wanted in on the deal and said that he could help with the technology side of things. Together, they offered $500,000 for 30% equity.

Manual countered the offer, asking for $500,000 for 10% equity between Mark and Kevin. Plus, he added a $0.25 royalty per hardcover sold to sweeten the deal. However, Kevin doubled down on the value he would add to the company.

In the end, the entrepreneurs took the deal. So, how are things going now? Let’s take a look at our Black Sands Entertainment update to find out.

During our Black Sands Entertainment update, we found that they have been featured at New York Comic Con, Publishers Weekly, and other high-quality authorities on comic media. They sell bundles of their various titles on their website, where you can also find some sweet merch!

We can’t wait to see where our next Black Sands Entertainment update takes us!

Check out our other company updates from Shark Tank Season 13 Episode 10:

Before you go, take a look at the other company updates from Shark Tank Season 13 on our Season 13 products page.