Real fishermen can appreciate the struggle of trying to hold your beer while you reel in a fish. Chill-N-Reel is a beer koozie that does just that, sort of. It’s a beer koozie with a reel on it, meaning you can cast a line and hold your can without spilling. Chris Diede, Jake Rutledge, and Chase Terrell are tapping into a huge market for fun. Find out if the sharks felt the same in our Shark Tank Chill-N-Reel update.

The Chill-N-Reel team gave a great pitch, including a demonstration of how their product worked. It wasn’t for serious fishing or big fish, but the ability to cast a line from your beer koozie was innovative and fun. The sharks were skeptical but open-minded. 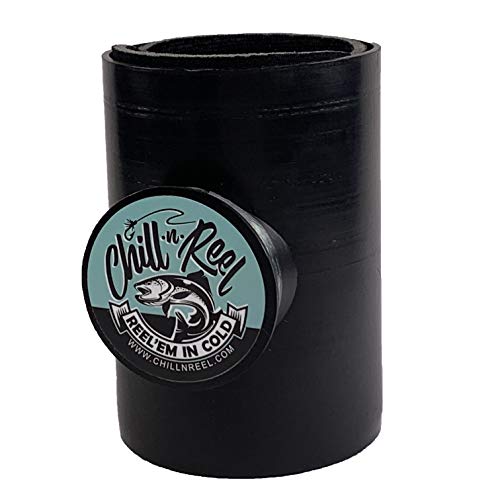 In the last 12 months, Chill-N-Reel had $1.3 million in sales, but most of their profits went to inventory, and they have a huge stock of in their warehouse.

Kevin O’Leary thought the product was fun, but he couldn’t see investing in something like this. He went out, followed by Lori Greiner. It wasn’t the product for her either. Daymond John left as well, and for the same reason.

This left Mark Cuban and Robert Herjavec. Mark went out shortly after everyone else, stating that there wasn’t enough margin for him. Robert wasn’t sure about the product, but he liked the idea of selling fun. He offered $300,000 for 10% equity and a perpetual $2 royalty on each unit sold.

The entrepreneurs were not okay with the royalty deal and offered 15% equity instead. Robert wanted more equity without the royalty, and they couldn’t come to an agreement. Unfortunately, Chill-N-Reel left the tank without a deal. Find out how they’re doing in our Shark Tank Chill-N-Reel update.

Since appearing on the show, Chill-N-Reel seems to be growing steadily. In addition to the regular Chill-N-Reel, they now sell adaptors for slim cans (or bottles), as well as extra hooks, sinkers, and sleeves for the inside of the koozie.

Interested in what happened to the other products in Season 13 Episode 23? You can find our company updates here:

For our company updates for the rest of Season 13, you can check out our Season 13 products page.