Hug Sleep appeared on Shark Tank Season 12. Founders Angie Kupper and Matt Mundt secured a deal with Mark Cuban and Lori Greiner at $300,000 for 20% equity. Here’s a quick recap of everything that happened during the pitch as well as news on a Hug Sleep update after Shark Tank.

In Shark Tank Season 12 Episode 3, Angie Kupper and Matt Mundt asked the sharks for a $150,000 investment in their company, Hug Sleep, in exchange for a 10% equity. Hug Sleep is an adult swaddle-like blanket that aims to promote calming rest, similar to that of a weighted blanket. However, unlike the blanket, Hug Sleep is a light-weight, washable swaddle that cocoons the user and makes them feel as if they are being hugged. 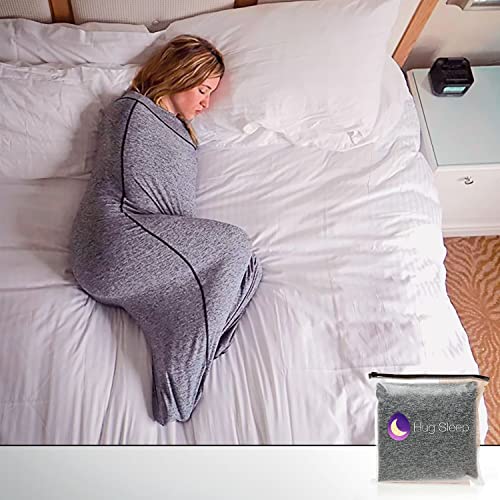 Angie and Matt quickly impressed the sharks, sharing that Hug Sleep has amassed $490,000 in sales over the past 16 months, with $335,000 in sales in the last 12 months. Further, each blanket sells for an average of $99 and has a profit margin of 41%. Additionally, the company was started with just $2,500. After everything was laid on the table, the sharks got into a bidding war and tons of different offers were thrown around. However, by the end of it, Hug Sleep had two different offers with all five sharks involved.

After Angie and Matt had considered all the offers, they accepted the deal from Mark Cuban and Lori Greiner for a $300,000 investment for 20% equity.

After Shark Tank, Hug Sleep sold out of product and were forced to take waitlisted orders. During Season 12 Episode 17, we got an official Hug Sleep update. Matt and Angie shared that the day after their episode aired, they received $2 million worth of sales. Further, three months after airing, Hug Sleep had amassed $4.1 million in sales.

Further, Matt and Angie have launched a new version of the pod that allows for more movement, as well as a version for kids. The future looks bright, so be on the lookout for another Hug Sleep update soon!

For updates on other products that appeared on Season 12 Episode 3, check out the links below: