With the goal of reinventing the reusable water bottle market, Justin Wang created LARQ, a company that manufactures the world’s first-ever self-cleaning and purifying water bottle. Having already done millions in sales, Justin headed into a Shark Tank asking for $500,000 in funding for 1% equity, making this the largest valuation in the history of Shark Tank at the time of writing. With such a bold and historical ask, you’re probably wanting a LARQ update.

Using patented technology, the LARQ self-cleaning water bottle can eliminate as much as 99.99% of harmful viruses, bacteria, and more. With this technology and estimated market size of more than $300 billion worldwide and growing, Justin entered the tank confident that his $50 million valuation for LARQ is justified. 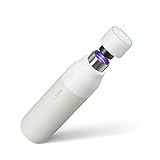 He explained that he first launched LARQ in 2018 and since then, the product’s sales have increased every year. He says that he expects LARQ to make more than $14 million in sales in 2021.
Naturally, the sharks were impressed with the sales numbers and were further amazed by the financial health of LARQ. According to Justin, LARQ had an excess of $6.5 million in the bank and donates 1% of all revenue to charitable partners that help people gain access to clean water all over the globe.

Right after Justin finished introducing his product to the sharks, three jumped in to make an offer. Kevin O’Leary was the first, offering to invest $500,000 in exchange for 4% equity. Meanwhile, Lori Greiner offered the same amount of money but for a higher equity share of 5%. Robert Herjavec chimed in with his own offer of $500,000 in exchange for just 3% equity with an additional 2% in advisory shares.

Seeing the opportunity at hand, Justin countered back, asking the sharks if they were willing to pool their money together for $1.5 million for a 4.5% equity share with an additional 1% in advisory shares. Unfortunately for Justin, Robert felt that the deal was getting too complicated, so he decided to drop out.

Thankfully, both Lori and Kevin agreed to work together. The result was a $1 million investment for 4% equity in LARQ, which Justin was more than happy to accept.

Having walked out of the Shark Tank with what Daymond John claims is the “valuation of the CENTURY!”, wanting a LARQ update is only natural. Although we don’t exactly have a sales figure to share with you, we do know that LARQ has only continued to grow since landing a deal on Shark Tank.

LARQ has since been featured on a handful of news outlets and is considered to be one of the best water bottles on the market today. The LARQ Bottle PureVis has received 2,093 5-star reviews on LARQ’s own website from satisfied customers, with LARQ Bottle Movement PureVis getting 737 5-star reviews, and the LARQ Pitcher PureVis selling fairly well too.

Considering all the positive publicity that the LARQ has been getting lately, we wouldn’t be surprised if, in the next LARQ update, we’ll be hearing about the company being worth $1 billion.

Before you go, be sure to check out some updates on the other companies featured in Season 12 Episode 21: