Exercising while you’re traveling can present a challenge. Entrepreneur Nezar Akeel came up with a solution after too many missed workouts: a portable resistance band machine called the Max Pro. After Mark Cuban invested $500,000 in the company during Shark Tank Season 13, find out what happened next in our Max Pro Fitness update.

The Max Pro Fitness system is incredibly versatile, portable, and adjusts up to 300 pounds. During his pitch on Shark Tank, Nezar shared that he had nearly $8 million in sales year to date — and at $849 retail, that was no small feat. 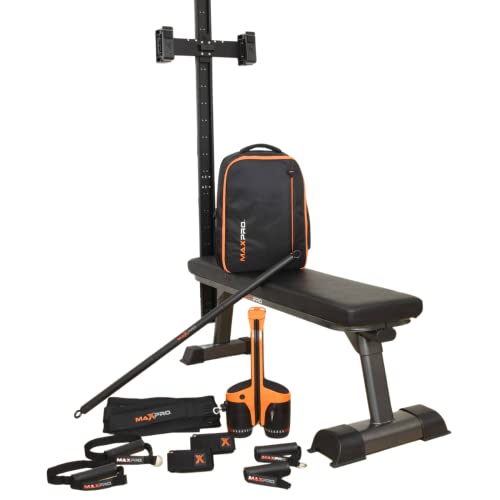 However, the company was burning about $100,000 per month in marketing. After the sales in the year to date, the company would just break even. The sharks were impressed with the sales, but a bit concerned with how the business was running.

Mark Cuban was the first to voice concerns. He didn’t like that the company was burning so much money and had borrowed large amounts of money, which meant it had large amounts of debt. Nezar revealed that the company has a few million dollars in inventory waiting to ship. He purchased such a large quantity after securing an endorsement from Shaquille O’Neal, but hadn’t moved the product yet.

As the sharks put it, the company needed money badly, so Daymond John made an offer. He offered $500,000 for a $25 per unit royalty until the money was recouped. Then, he would get 4% equity. Much to Daymond’s dismay, Nezar hardly reacted to this offer.

Instead, he explained that he wanted to continue to build out a fitness app that went along with the Max Pro. This confused Kevin O’Leary. He didn’t think they need an app at all, considering that everyone else had one. Kevin went out due to the difference in vision.

In response, Robert Herjavec dropped out. He said his offer wouldn’t have been as generous, and Lori followed for the same reason. Daymond was the last to drop out, stating that Nezar still didn’t acknowledge his offer.

This left Mark’s offer. Nezar wanted an assurance that Mark would help fund purchase orders, and Mark said they could talk about it in negotiations. With this sorted, Nezar accepted Mark’s offer. Where is Nezar now? Let’s have a look at our Max Pro Fitness update to find out!

Even before Max Pro Fitness appeared on Shark Tank, Nezar Akeel was doing well. The product is, of course, endorsed by Shaq. It’s also been featured in multiple publications, including Business Insider and Men’s Health.

Our Max Pro Fitness update was unable to find new information about sales, due to the recent airing of the episode. But with the popularity of Shark Tank and a great product, there’s no doubt that the company is doing well.

Curious about the other company updates from Shark Tank Season 13 Episode 9? Find them here:

For other company updates from Shark Tank Season 13, check out our Season 13 products page.