Sometimes, you wish you had three hands. Changing a tire or cleaning up after your dog in the dark requires help, additional hands, or another solution. Thankfully, Racquel Graham has the answer. Her company, ROQ Innovations, made a beanie with a rechargeable LED light in the brim, providing light and freeing up your hands. What more could you ask for? After pitching on Shark Tank Season 13, how’s the company doing now? Find out in our ROQ Innovations update.

Head Lightz by ROQ Innovations is a washable beanie with a rechargeable LED light. You can remove the light to charge it via USB when needed and each light produces a powerful 140 lumens. 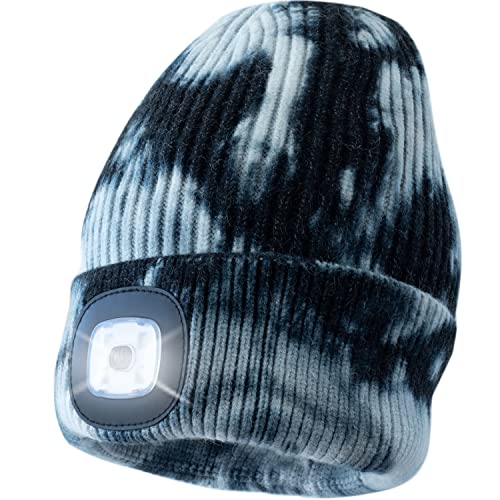 Racquel Graham brought ROQ Innovations onto Shark Tank Season 13 with a goal of making a deal of $200,000 for 15% equity. Head Lightz was just one of her products, which includes a line of scarves and masks as well. During her pitch, Racquel revealed that she had $2.4 million in lifetime sales. Her products have been featured on Oprah’s list, Home Shopping Network, and more.

The sharks were on board with Racquel until she revealed that her patent for Head Lightz was pending. It was filed in 2018 and has been pending since, which was a concern for the sharks.

However, Kevin O’Leary was interested and made an offer. He offered $200,000 but didn’t want any equity. Instead, he offered a royalty arrangement: $2 per hat until he recouped $200,000, and then $1 per hat in perpetuity.

After hearing these two offers, the other sharks began to go out. Lori Greiner had a conflict of interest, and Mark Cuban didn’t know how he could add value. However, Daymond John was concerned about the patent, so he went out as well.

After some debate, Peter asked if Kevin would go into a deal with him. After some quick negotiations, they settled on an offer of $200,000 for 20% equity, plus a $1 per hat royalty until they recouped $600,000. Racquel accepted this deal. Find out where she is now in our ROQ Innovations update.

In our ROQ Innovations update, we found that the company has been featured on The View, Good Morning America, Forbes, and Black Enterprise. Additionally, Racquel is always coming out with new products. With two sharks on her team now, the company is in a great position to massively increase its sales.

Now, you can purchase face masks, neck wraps, and a variety of beanie styles on the company’s website.

Take a look at more company updates from Season 13 on our Season 13 products page.