Elisa and Chris Cirri appeared on Shark Tank Season 13’s holiday episode with their enchanted mailbox that sends letters directly to the North Pole. This product was created to spread holiday magic to children, but will the sharks be enchanted by it? Find out in our Santa’s Enchanted Mailbox update.

Nothing is more rewarding than seeing a child’s face light up when they get to experience a little bit of magic. Santa’s Enchanted Mailbox was created to create that holiday awe in children of all ages. Simply put the letter in the mailbox, raise the flag, and the letter disappears! 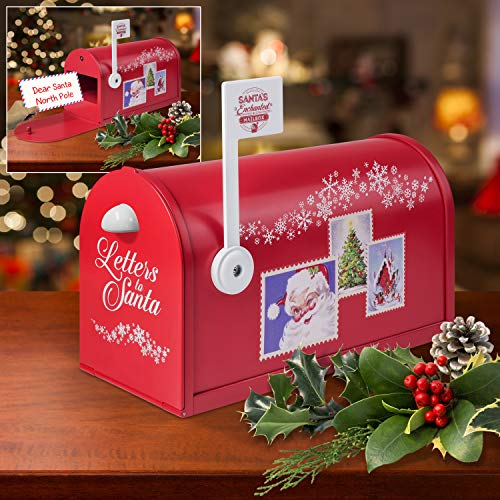 Elisa and Chris had two utility patents on the design, a trademark, and licensed the product out to a large holiday corporation. Unfortunately, that partnership just ended after three years. It left them with high manufacturing costs and fewer sales. Each mailbox cost $17.25 to make and sold for $49.99, but some big-box retailers had to reduce the price so it would sell.

The sharks began weighing in on this complicated product story almost immediately. Despite $1.7 million in sales, Kevin O’Leary dropped out of the deal. It was too seasonal for him. Mark Cuban followed, citing the business’s complicated history.

Daymond John interjected that it was hard to sell at retail. The company just wasn’t to a point where he could invest, so he dropped out. Barbara Corcoran thought that the product was too expensive, and added that they should just do something else before dropping out.

You can find Santa’s Enchanted Mailbox on their website, Walmart, Bed Bath & Beyond, and certain other retailers. While we don’t have any hard data, we’re sure that Elisa and Chris are doing well, given the popularity of Shark Tank. But research for our Santa’s Enchanted Mailbox Update didn’t return any new information about the company, however, we will be sure to update this post when we find out more!

Make sure to take a look at the other company updates from Shark Tank Season 13 Episode 8 here:

For more from Shark Tank Season 13, check out our Season 13 products page.