A lot of people are asking for a Copper Cow Coffee update after Debbie Wei Mullin entered the Shark Tank and left with a deal. Initially asking for $600,000 for 4% equity, she left with $600,000 for 5.5% equity and 1.5% in advisory shares from Robert Herjavec in the season finale of Shark Tank Season 12, and we’re sure that you want to know what happened next.

The young Vietnamese-American entrepreneur brewed her way into a deal on Shark Tank by giving the sharks samples of her coffee and introducing them to Vietnamese coffee. So, before they could protest about her $600,000 ask for 4% equity, the sharks already knew that she had a good product and would soon find out that she also had good sales too. 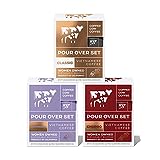 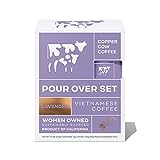 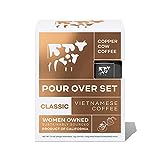 Unfortunately, as Debbie began to explain how her business worked, the sharks seemed displeased by the low-profit margins and the losses that the business had incurred over the years. The sharks then probed Debbie about how her business was able to sustain such losses, which is when she shared that she had raised a few million from two funding rounds.

After explaining that the prior investments were all lost in the process of trying to keep the business afloat, Daymond John couldn’t help but criticize Debbie. Lucky for Debbie, Robert Herjavec and Mark Cuban didn’t hesitate to come to her rescue, albeit Daymond was still not happy with how she was supposedly blowing through her investor’s money.

Unlike Mark though, Robert didn’t just come to Debbie’s rescue. He actually made an offer. After not liking the coffee for being too sweet, Robert explained that he understood the need to spend money before making money. Thus, he offered $600,000 for an 8% stake in Copper Cow Coffee.

After seeing that Debbie wasn’t willing to give up that much equity, Robert reworked his offer for lower equity ask of 5.5% with an additional 1.5% in advisory shares. Debbie quickly accepted Robert’s offer and walked away feeling happy.

Because Debbie’s pitch only aired in the most recent season, we don’t have a lot to offer in terms of our Copper Cow Coffee update. However, we do know from an interview with Cale Guthrie Weissman of ModernRetail that the “Shark Tank effect is real” and that the business is getting more orders than ever before.

Debbie added that she’s curious to see what will happen in the next six months and you’d best bet we are too. Be sure to stay tuned for our next Copper Cow Coffee update.

For more on Shark Tank Season 12, be sure to check out our Season 12 Products Page.