The laundry industry creates a lot of excess plastic, and most of it ends up being burned or in the ocean. To put a stop to it, entrepreneurs Chris Videau and Chris Campbell created dissolvable laundry-detergent sheets that are convenient and smell great. After pitching it on Shark Tank Season 13, will the sharks love this fresh deal? Find out in our Sheets Laundry Club update.

Chris Videau and Chris Campbell’s solution to the global plastic problem is to eliminate plastic completely from the laundry industry. Chris was a Blackhawk pilot in the U.S. Army. When he was stationed in Iraq, flying planes over cities where trash was burned in the streets destroyed his lungs. When he came back, he decided to make big moves against plastic waste to try and help the planet. 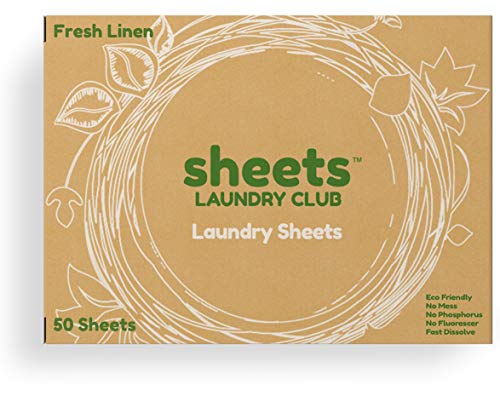 Their laundry detergent sheets dissolve quickly in the wash. They use coconut oil and plant-based ingredients, with no synthetic ingredients. They are convenient and cost-effective, just toss them in the washer with your laundry and you’re good to go!

Sheets Laundry launched in January 2020, and they already have $2.046 million in sales. They operate at 24% profit and have a temporary patent share with mega-brand Kimberly-Clarke. They pay a royalty on the patent, and it will expire in 2024.

The sharks love the idea behind the sheets. During the demonstration, they’re all impressed with the way that the sheets dissolve almost immediately in cold water.

However, Barbara Corcoran is concerned about the expiring patent. They also tell the sharks that they have 30 different products in their line, and that’s concerning to her. She doesn’t think they are persuasive and that they don’t really sell. She needs them to be more aggressive. She’s out for the time being.

They offer an answer to her concerns — they’re going to do almost $7 million this year. Their marketing is all social media and word-of-mouth, too.

Kevin O’Leary’s portfolio includes a company called Blueland, which is doing nearly the same thing. It’s a conflict of interest, so he has to go out. Lori Greiner, on the other hand, isn’t excited about the equity amount. It doesn’t seem worth it to invest, so she’s out.

Mark Cuban doesn’t want to expand globally, and the entrepreneurs have mentioned that’s where they want to take the business. He thinks that would be expanding too quickly, so he’s out.

Finally, guest shark Daniel Lubetzky is concerned about the valuation and asks them to explain their reasoning. Turns out they have an online re-order subscription service with 21,000 subscribers, which produces great monthly revenue. They will begin testing in Target stores in April 2021.

Upon hearing this, Daniel offers them $500,000 for 10% equity in the company. Unfortunately, they have an 8% ceiling. Daniel asks if they would do $500,000 for 8% equity and 2% advisory shares, and they agree after some deliberation.
Was this a good deal for them? Keep reading our Sheets Laundry Club update to find out how the company is doing since the episode was filmed.

Sheets Laundry Club will no doubt see a rise in sales after the episode airs. The company ran a discount code on their website after the show, capitalizing on its appearance. In our Sheets Laundry Club update, we discovered that they were featured on Fortune, WCNC, and in other large publications. No new numbers have been reported, but with the exposure from Shark Tank, a new partner, and launching in new more physical stores, we are confident the company will be successful.