Keeping shoes clean and shiny isn’t easy, which is why the founders of SneakERASERS, Chris Pavlico and Kevin Consolo, came up with their patent-pending solution. The unique design of the dual-sided sponge is a convenient and portable way to keep shoes looking clean and sleek. Chris and Kevin headed to Shark Tank Season 12 to try their luck by offering 8% equity in exchange for $200,000 in funding. The two would ultimately walk out with a deal with two Sharks in Alex Rodriguez and Lori Greiner for $200,000 and 20% equity. With two Sharks in tow, a SneakERASERS update is a must. Lucky for you, we are happy to oblige.

Now, before we go and talk about our SneakERASERS update, let’s go back to what happened inside the tank first.

Chris and Kevin entered the Shark Tank to pitch the patent-pending SneakERASERS dual-sided sponge. This pre-moistened sponge has been designed to easily remove scuff and dirt marks to make it easier for everyone to keep their shoes looking clean and fresh. 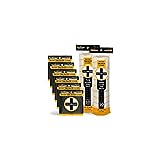 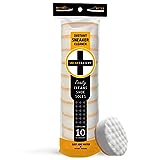 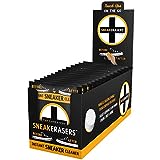 With such a useful product, the two were more than happy to share that they had sold $1.1 million worth of products year-to-date at the time of the episode. Even better, they were expecting to close out the year with $1.8 million in sales, which was likely the result of their deals with big-box retailers rolling out their products nationwide.

However, the two still felt like a shark was necessary to help them with their margins, as well as marketing and advertising strategies. Right from the gates, Lori Greiner and Alex Rodriguez teamed up to offer $200,000 for 20% equity in SneakERASERS. The two believed that their backgrounds made them the perfect sharks for the product. However, Mark Cuban also threw his hat into the ring, saying that he had a completely different idea for how SneakERASERS can blow up.

According to Mark, SneakERASERS would be better off partnering with shoe companies. To make this happen, Mark offered to invest $200,000 for 12.5% equity.

While this was a better offer compared to what Lori and Alex extended, Chris and Kevin couldn’t help but counter. This turned off Mark, resulting in the Dallas Mavericks owner pulling back his offer. Lori and Alex were thinking about doing the same as well, but just before they could do so, Chris and Kevin accepted their offer.

In the months since airing on Shark Tank and securing a deal, we have good news for our SneakERASERS update — the company has exploded! At the time of writing, the Instant Sole and Sneaker Cleaner has received 1,087 ratings on Amazon. Meanwhile, their products were recently chosen to be one of 28 products that are a part of ABC’s GMA deals by Tory Johnson for Good Morning America.

It’s amazing to see how much more SneakERASERS has grown, especially on the e-commerce side, just months after appearing on Shark Tank. It’s probably only a matter of time before we do another SneakERASERS update as Chris and Kevin’s company reach new heights.

Before you go, be sure to check out updates for the other companies featured on Season 12 Episode 23:

For more on Shark Tank Season 12, be sure to check out our Season 12 Products page!