The Lapel Project appeared on Shark Tank on September 30, 2016. Founders Sebastian Garcia and Raul Bernal left the tank with a deal from Mark Cuban of $150,000 for 30% equity. Here’s a quick recap of everything that happened during the stick on lapel pitch as well as news on a The Lapel Project update after Shark Tank.

The Lapel Project was featured on Shark Tank Season 8 Episode 2 and was pitched to the sharks by Sebastian Garcia and Raul Bernal. Essentially, the company creates stick on lapels that can turn a regular dress coat into a tuxedo. It’s designed for people who don’t own a tux and don’t want to spend a few hundred bucks on a one-night rental. Additionally, each lapel can be customized and used 5-10 times. 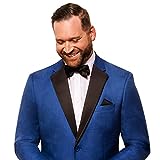 When it appeared on Shark Tank, The Lapel Project was only selling in one store, owned by Sebastian, and had zero online presence. However, for the six months that it was available in Sebastian’s store, it sold $16,000. Additionally, each lapel set sells for $50-$100.

After sharing that he needed help getting set up with online sales, Mark Cuban expressed interest and made Sebastian and Raul an offer of $150,000 for 30% equity. After some of the other sharks started dropping out, The Lapel Project accepted Mark’s offer.

In terms of The Lapel Project update after Shark Tank, Mark Cuban has helped the company build an online presence and is currently selling its custom lapels on its website. Additionally, it looks like the company has also created some collections, for those that want a bowtie and loafers to go with their lapel.

For updates on the other products featured in Season 8 Episode 2, check out the links below:

For more Shark Tank product updates, be sure to check out our Season 8 Products page!