Small messes can be a pain to clean up. Thankfully, Trever Lambert and John Vadnais thought of a solution. The VaBroom is part vacuum, part broom, and all innovation. After pitching it on Shark Tank Season 13, did the sharks love this genius hybrid cleaning product? We’ll refresh your memory with a quick pitch recap and a VaBroom update.

Trever Lamber and John Vadnais brought VaBroom into the Shark Tank with flair. Their broom-vacuum hybrid is pressure-activated and great for small spills and messes. It isn’t supposed to replace your vacuum, but instead be a better version of the broom. This lightweight product was a hit among people who had trouble bending down, as well as moms. 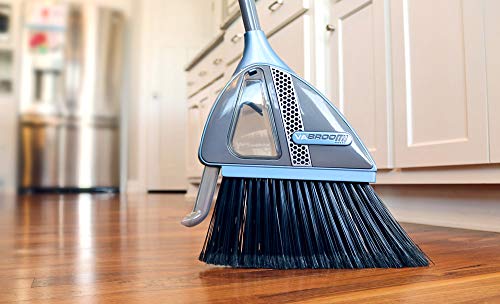 In the last 12 months, VaBroom had $3.1 million in sales. Obviously, there’s a market for this and the product had been featured at Bed Bath and Beyond as well as selling direct-to-consumer.

The sharks seemed to like the Vabroom, but there were some concerns. Mark Cuban was the first shark to drop out, stating that the equity offer was too low. He also cited issues with their design firm model as one of his reasons for leaving the deal.

Guest shark Peter Jones had similar concerns. He also thought the product was unnecessary, so he went out. Daymond John exited quickly after, stating that the equity was too low to consider. He even suggested that they might be there for exposure.

This left two sharks on deck. Kevin O’Leary liked the product, but he needed more incentive to sell it. He offered $350,000 for a 2.5% stake in the design firm. The deal included a $3 per unit royalty until Kevin recouped $700,000.

Upon hearing this offer, Lori Greiner decided to drop out and was unsure about the patents associated with the product.

Trever and John tried to haggle Kevin up to $700,000 for a 5% stake, but he refused. In the end, they accepted the royalty deal. Was this a good deal for Kevin? We’ll find out in our VaBroom update.

Our VaBroom update revealed that the company continues to thrive. So far, the company has been featured in over a dozen publications, including Trend Hunter, Digital Trends, and more. With the exposure from Shark Tank, Vabroom will no doubt see an increase in sales and customers.

Check below for other company updates from Shark Tank Season 13 Episode 11: